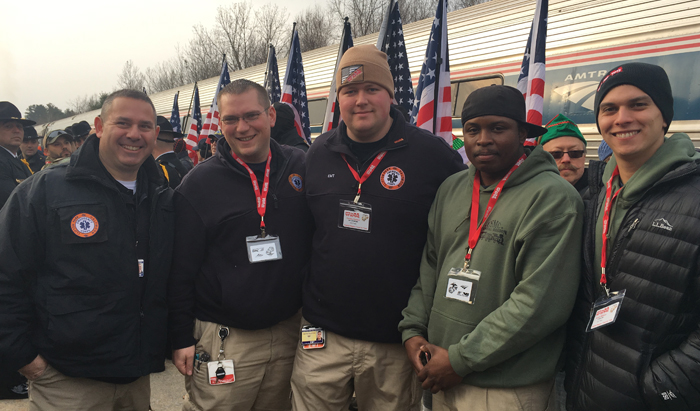 It was the initial goal of CPHM to create 500 blankets, but due to an incredible swelling of community support and engagement, they were able to double that amount. The result was 1,000 blankets that were distributed on the Toys for Tots train this past weekend. The first 500 blankets were given away on the Western run; the remaining 500 were given out on the Northern trail.

CPHM hosted 5 blanket-making events that drew over 150 volunteers under a 4-week span of time. Additionally, community members organized their own efforts, taking blanket kits home to complete. During the span of the blanket making events, CPHM warmly welcomed special visits and the helping hands of Congressman Paul Tonko as well as Assemblywoman Marybeth Walsh.

“We knew our goal of making 500 blankets was ambitious – especially since time was not on our side, but we were absolutely blown away by the rally of support from the community.” Says David Kunzelman, CPHM Paramedic who oversaw the blanket project committee and logistics.

The CPHM membership knew that creating these blankets for the children was important, but it wasn’t until they actually experienced handing them out, that they truly comprehended their significance.

Toys for Tots Coordinator and Marine Gysgt Albert Roman Jr. says ”The kids cherish these blankets. It’s a source of warmth and security for them. Of course they love the toys, but there is something special about the ownership and pride the children feel about these blankets”.

Kunzleman agrees. “My experience on the Toys for Tots train was defining. The kids were excited about receiving a toy, but there was just as much joy and relief when they were handed a blanket.”

Roman added, ”Toys for Tots is grateful for our partnership with Clifton Park Halfmoon EMS. As we say with Toys for Tots; “Go Big or Go Home." They certainly went big! They made sure we had blankets to hand out this year.”

Additionally, CPHM, with the generous support of the Clifton Park Walmart, was able to purchase and donate 100 children's winter coats to Toys for Tots.

Clifton Park Halfmoon Emergency Corps plans to continue their effort and partnership with Toys for Tots for the 2018 holiday season.

For the past ten years, Gold Star Mother, Dawn Martin, has orchestrated the creation and donations of over 7,200 blankets to children through Toys for Tots. Her project is called “Uncle Shawn’s Hugs” and is a way to honor her son’s legacy. Uncle Shawn’s Hugs has recently shifted their distribution focus but is still very much active in providing blankets to local nonprofit organizations.