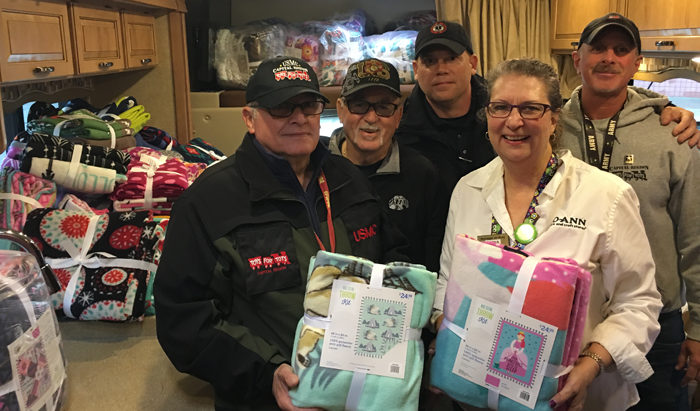 For the past ten years, Gold Star Mother, Dawn Martin, has orchestrated the creation and donations of over 7,200 blankets to children through Toys for Tots. Her project is called “Uncle Shawn’s Hugs” and was a way to honor her son’s legacy.

Mrs. Martin’s son, United States Marine Sergeant Shawn Martin was killed in Iraq in June of 2007. “Shawn always gave to everyone, he also gave the best hugs. His friend’s children called him Uncle Shawn.” Says Martin. “When I wrapped a warm blanket around these children standing in the snow, some even without winter clothing, I felt like I was giving them a warm hug, just as Shawn always gave, thus Uncle Shawn's Hugs was born.”

Toys for Tots Coordinator and Marine Gysgt Albert Roman Jr. says ”The kids cherish these blankets. It’s a source of warmth and security for them. Of course they love the toys, but there is something special about the ownership and pride these kids feel about these blankets”.

Unfortunately, this year, due to increasing need and personal reasons, Mrs. Martin is unable to manage the logistics of creating the blankets, so Clifton Park Halfmoon Emergency Corps formed a task force to make sure that Uncle Shawn’s legacy was preserved.

Roman Jr. said “Uncle Shawn’s Hugs has been an amazing charity to partner with, Mrs. Martin has poured her entire heart and soul into making these memorial blankets. We have children and families that come to meet us every year at our train stops just to see her and maybe have a chance to get one of Sgt Martin’s blankets. When we heard that she needed some help this year to continue the program we knew we could turn to Clifton Park Halfmoon EMS and it’s partners for help. I’m looking forward to seeing Mrs. Martin’s dream continue on with their help.”

These are family events; all are welcome.